Unlike the first half of the year which astrologically speaking was focused around home and family during the Cancer~Capricorn eclipse cycles. Expect this Leo season to be all about ambition, our dreams and goals. Our attention is just as likely to be focused around personal achievement in creativity, hobbies, sports or sexual conquests as with any financial or work status. Let’s delve into Leo zodiac sign traits, energy and actions to take this sun transit…

Leo energy is fundamentally about living your personal best not plodding to others drums. You wouldn’t be off-hand calling Leo natives a little lazy at times, they certainly enjoy their sleep. However, I’d like to put a positive slant on this trait, like Leo’s symbol the Lion- they only expend energy if it is completely necessary. This seemingly lazy quality means that Leos maximise and retain their vitality for frivolity, rich food, good music and time with people they love.

As we’ve established Leo is truly creative energy ready for power and the lime-light, as you would expect some of the worlds best film directors and writers are part of this exclusive club.

Said to have had an IQ of 200, Kuberic is one of the world’s greatest directors. He helped to sculpt cinematography into a true art form, never afraid to push a risky subject matter or challenge censorship in the name of art and integrity. He pushed whole genres to new levels. Without his pioneering work other directors would have never created many of the classics we know today. His drive and self belief is truly a Leo trait and totally a need for creative control, making him a classically, brilliant example of Leo. I would also like to mention Alfred Hitchcock, a fellow Leo and another forerunner of modern cinema. Both directors were entirely unique in approaching their craft. They created with total self belief and held complete control of their own projects. This Leo season we can remember that the insignificant things may be delegated, but the things we are passionate about need to remain our focus in order to get the results we desire.

Like Kuberic, Kate Bush maintains full creative control of her own output. Setting up her own production company and making her own music videos, songwriting and touring all remaining strictly in her control. There is no doubt Bush is a genius, but she is not a typical Leo in the way she approaches stardom. She rarely gives interviews or performs live. Where she is a typical Leo though, is that she values her privacy and family life above all things. Prioritising family time and raising her son above her creative output. While Leo energy is big, showy and indulgent at times, when they love- they love deeply and protect the people and things they love with fierce loyalty.

Most of us probably know that this woman is the world’s most successful writer. She is also one of the biggest donors to charity. You may also know of her rags to riches story of writing her first Harry Potter book as a penniless single mother. The thing that really illustrates Rowling’s Leo quality is that she has and will always write. She did not write to be rich or successful, she wrote because she needed to for her pleasure, her mind and her sanity. Even now after selling millions of copies for her books world wide she still continues to write new and interesting fiction. Leo’s take great joy in doing things for pleasure and while they can be competitive, mostly they are striving to compete with themselves above all others.

Mars the planet of action is now in the fire sign of Aries, so this month’s energy will be given an even bigger boost to really push projects to fruition. Before Mars goes retrograde on September 9th 2020. Finishing a project is a must this month, don’t delay. Use the Leo energy to delegate if you have important deadlines.

Leo can also inspire laziness, so be sure to set your goals into quantifiable time frames sandwiched between social and down time.

This is the season of creativity. Challenge yourself to get creative. Find new resources online or in person (COVID restrictions permitting) and do something fun that you never thought you could do. Take time to appreciate your friends and family and embrace the Leo feeling for abundance and togetherness. 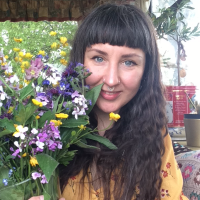 by Hazel
Hazel is a professional Fortune Teller, Occult Teacher, Esoteric Workshop Leader and is a published Writer on Magick. Hazel has been studying Tarot, Astrology and Pagan practices for 20 years.
« Ocean-Friendly Sunscreen Guide To Protect Your Skin This Summer
Talking Forward-Thinking Family Wellness with GetSetGo! Founders Claire & Alina »